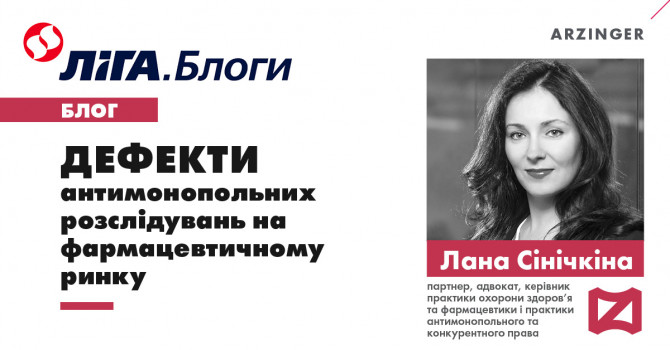 Defects in antitrust investigations in the pharmaceutical market

It so happened that my colleagues and I were granted access to the files of all antitrust cases related to the provision of discounts on the Ukrainian pharmaceutical market over the past ten years. In some cases, we supported companies from the very outset of investigations in the Antimonopoly Committee of Ukraine (AMCU). Some were picked up by us in courts with a view to appeal decisions of the AMCU, and we gave our clients the so-called "second opinions" in others.

Having taken part in the mentioned proceedings, both in meetings of the Antimonopoly Committee and in courts, having listened to the arguments and logic of the antitrust authority, I decided to write a detailed professional note about what is wrong with the Ukrainian investigations into "excessive prices for medicinal products."

Some time ago, we already published an article describing the key differences between the best practices of foreign competition authorities in prosecuting "excessive pricing" and the Ukrainian authority's know-how. However, given the insights of 2020 and the recent court practice, it seems that the need is ripe for a deeper analysis.

How can discounts become a tool for overpricing?

Many foreign peers and clients often ask us to explain the Ukrainian antitrust authority's claims regarding the discounts provided by pharmaceutical companies in the market. We often have difficulty in communicating the logic of the national antitrust authority, as competition lawyers around the world know that discounts in sale and purchase agreements are a tool to reduce prices and can never influence a price towards increasing it.

The AMCU's main logic and accusation is that a supplier of medicines (which normally belongs to the manufacturer's group), while providing discounts to its distributors "bypassing the state-limited distributors' trade margin", aims at providing them with additional illegal income in the form of a discount rather than at conveying a reduced (discounted) price to the end consumer.

At the same time, our peers have a reasonable question: Why should a foreign supplier provide additional income to some local distributors by overpricing its own products for the final consumer? We asked the same question more than 10 years ago when participating in the first investigations of that kind. Our argument that a supplier (even of the most unique goods) cannot be inherently interested in simply giving money to its independent contractor and making its products expensive for the end consumer did not find any logical response from the authority.  Indeed, why should a manufacturer overprice its products in the market only to reduce the demand and production volumes? Just to reward its contractor with illegal income? Any economist knows that this would be contrary to any manufacturer's sound economic interest. In the sale and purchase relations, a supplier has a cardinally opposite interest – it wants as many end consumers to buy as many of its products in the market as possible. An artificial and unreasonable increase in the margins of downstream sellers has a reverse effect. Therefore, suppliers normally use various commercial tools to reduce rather than to expand the margins of such distributors.

Nevertheless, the Committee thinks differently, and no arguments of common sense or even economic studies can make it change its mind.

But how does the Committee prove that prices have become excessive?

Proving inflated prices obviously requires some basis for comparison, i.e. some other prices that are not considered excessive, being arm's-length and reasonable. However, there is no such basis in the AMCU's decisions. The Committee did not take on the task of a real market situation economic analysis. It did not determine the level of fair prices and did not study their dynamics as well as the economic factors affecting them.

The antitrust authority confined itself to hypotheses. It calculated a fair price as a hypothetical price, assuming that it should imply all discounts or any other finance ever given by anyone in the supply chain. This is hardly thinkable, but the Committee believes that a Ukrainian subsidiary should reduce import prices by any financial aid ever provided to the Ukrainian supplier by its parent. In fact, the Committee denies the very existence of intragroup financing, seeing it as a way to generate illegal income so as to bypass the state regulation of prices. Likewise, it denies the possibility of commercial discounts that  are not yet accrued at the time of delivery, as conditions for their accrual set in later (e.g. the standard cumulative quantity discount pracitce).

The Committee argues that prices in the state segment are excessive compared to those in pharmacies. Isn't that a reason to worry?

That is a reason to study the relevant economic factors. After all, the Antimonopoly Committee is a specialized agency that should primarily use the tools of real economic analysis. No in-depth market study is required to understand that the inherent economic factors of the pharmacy sales segment contribute to lower prices. If we look at the sales volumes in these two segments, the public procurement market during the investigation period was approximately 10% of the total consumption market. At the same time, the risks (financial, reputational ones) as well as the costs of logistics, bank guarantees, administration of tender sales largely exceed those in the pharmacy segment. Anyone even passingly familiar with business and economics understands that these two segments simply cannot be comparable, given the spread in the sales volumes and risks. Therefore, prices for products in them can absolutely reasonably differ. However, the antitrust authority gives no assessment to these arguments but continues to repeat its mantra about excessive prices compared to pharmacies.

The Committee's statement about overpriced imported medicines compared to similar products of other (e.g. Ukrainian) manufacturers is even more surprising. The similarity of prices for competing products (with different cost bases) should rather worry the competition authority in terms of a potential price collusion of competitors. Unfortunately, any arguments that prices for similar products can be reasonably dissimilar due to different brand values ​​and goodwill, different costs in the production and supply chain, and eventually different pricing and marketing strategies are disregarded  in the antitrust authority's decisions.

What about the courts?

For a start, the Ukrainian history of litigations on vertical anti-competitive concerted actions is only a few years old. As things stand, there is not even a generalizing clarification from the Supreme Court regarding the specifics of this category of cases. Moreover, the only detailed Ruling of the Supreme Court on competition disputes does not differentiate anticompetitive concerted actions into vertical (agreements between seller and buyer) and horizontal ones (agreements between competitors). However, these two institutions are fundamentally different in their economic and legal nature. In general, vertical agreements rarely get in the crosshairs of antitrust regulators around the world, unlike horizontal cartels, which pose serious risks to competition. In the absence of any specific clarification on vertical agreements from the high court, many lower courts that consider such disputes “mindlessly” copy the provisions of the Supreme Court's Resolution, which, by common sense, simply cannot relate to vertical concerted actions. And this is not some random error of one judge. It is repeated carbon-copy by more and more servants of Themis. When reading such decisions, one becomes painfully aware of the level of our judicial practice in antitrust cases. Indeed, one can talk about difficult economic categories for half a year, provide expert opinions, and then get a decision where a judge demonstrates a total ignorance of the difference between direct competitors' anticompetitive behavior and vertical relationships.

What is the AMCU up to in these cases?

We often ask ourselves and the Committee this question. It is certainly obvious to us that the AMCU insists on the need to fully convey the supplier's discounts to end consumers. But where does the supplier come in, if its role is limited to providing a discount to the distributor, who has full discretion in the further resale pricing (including the supplier's discount)? Such a price for the end consumer is the subject of an entirely different (distributor-buyer) agreement, where the supplier is no longer involved and thus has no right to dictate the price to the distributor.

Due to such cases, pharmaceutical companies (manufacturers) often make a consistent decision to refuse discounts for Ukraine as such, since the antitrust authority sees evil in them. What is this going to lead to?  The room for price competition among distributors (who can offer the same manufacturer's product at competitive bidding, contending with each other) will decrease exactly by the amount of that discount, This means that prices for end consumers will go up. Hence, if the Committee sees evil in these discounts being not always and not fully considered by distributors in the final prices, then this practice may ultimately eliminate the discounts, so that there will be nothing left to take into account in the final prices.

Thus, though the main purpose declared in antitrust investigations is to reduce prices for medicines for the State and the population, they are fraught with markedly opposite results.

To be fair, in all the cases familiar to us distributors demonstrated to the Committee that such supplier discounts were quite often used in their pricing, i.e. were conveyed to end consumers (to different extents). This means that such discounts have a clearly positive social effect, lowering the final price of medicines and expanding the room for price competition.

Don’t other states care about reducing prices for medicines?

They do, but in a different way. They conclude direct contracts with manufacturers, guaranteeing them certain purchase volumes. In turn, manufacturers reduce their prices. These are normal economically sound relations.

As for abuse of prices for medicines, such cases do exist in other countries. If you google "exсessive pricing" antitrust cases in other countries, you will realize that no one sees inflated prices in discounts. On the contrary, in the rare cases where discounts are found to be anti-competitive, the accusations relate to the fact that such discounts are a tool of anti-competitive dumping (i.e. excessive underpricing to situationally oust the competitors). The vast majority of antitrust cases on "excessive prices" in Europe, America and other developed antitrust jurisdictions do not target discounts, but rather sharp increases (by several times!)  in the cost of a medicine purchased by the State as compared with long-term historical prices. By way of example, the price of a cancer medicine in the Aspen case increased from USD 6.5 per package to USD 82 in less than a year, i.e. more than 12 times. These are the stories that cause serious antitrust investigations. In no country of the world do regular commercial discounts, which are normally intended to reduce prices in the market, make antitrust authorities allege that prices are excessive.

This blog was first published (in Russian) in Liga.Blog