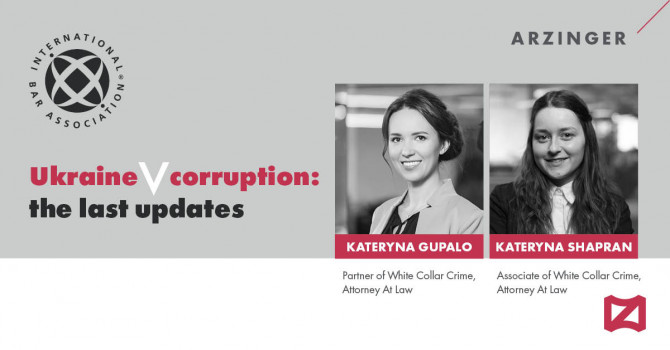 Last year was an intense and productive period of change to Ukraine’s laws, especially

legislation relating to combating corruption and impunity. The changes have affected the
Criminal and the Criminal Procedure Codes as well as other anti-corruption legislation. Apart from changes to Codes, new anti-corruption bodies including the High Anti-Corruption Court and the State Bureau of Investigation, came into operation. Ukraine therefore continues to improve and implement anti-corruption reform.

This article outlines the main changes and developments.
High Anti-Corruption Court begins its proceedings
On 5 September 2019, the High Anti-Corruption Court (the HACC) started its proceedings. Criminal cases investigated by the National Anti-Corruption Bureau of Ukraine and prosecuted by the Specialised Anti-Corruption Prosecutor’s Office should now all be transferred to this Court for further consideration.
It is important to note that the courts of general jurisdiction have lost their influence on interim measures and investigative actions in high-profile corruption cases. In particular, the motion for property attachment or transfer to the special Asset Recovery and Management Agency, should also be considered by the HACC.
The first sittings of the HACC include seven judicial benches, the appeal court has four benches. At the new Court, six investigative judges consider the investigators’ and prosecutors’ motions at the pre-trial investigation stage.
The HACC has its special jurisdiction in respect of corpus delicti, established in 23 Articles in the Criminal Code of Ukraine. The HACC is also mandated to consider thousands of old corruption cases, which have not been considered in years. According to the State Judicial Administration, there are 3,500 corruption-related cases, which may be further transferred to the HACC according to the legislative requirements.[1]
There are huge doubts that old cases will be considered in terms established by law. Given the high number of such cases, the HACC could be overloaded and blocked for the next few years. Therefore, many of the corrupt officials could be released.
Parliament should consider the Draft Law No 1025,[2] which is aimed at resolving the HACC’s overload problem.

The Head of the HACC, Olena Tanasevich reported the following statistics for the first 100 days of the HACC’s existence:[3]
• 2,142 motions, 720 complaints, and 65 applications submitted to investigative
judges;
• 2,457 trials or 84 per cent of the pending cases were completed;
• the first session of HACC received 191 criminal proceedings – 45 proceedings were returned to the general courts related to their jurisdiction, in four proceedings the court refused to approve the agreement or the indictment was returned to the prosecutor, in two proceedings, the court issued sentences; and
• 11 Judges of the Appellate Chamber of the HACC heard 244 appeals against decisions of investigating judges, 175 motions to refer a case to another court for violation of substantive jurisdiction, 25 appeals against decisions of courts of the first instance, and a total of 444 criminal proceedings, 343 appropriate decisions were made.
A new subject in corruption investigation: the whistleblower
On 1 January 2020, the law on whistleblowers entered into force. It’s aimed at protecting people (and their relatives) who report corruption, corruption-related offences. Any person who has become aware of corruption facts may inform the relevant authority’s respective department. Such reports may be signed or submitted anonymously.
The National Agency for the Prevention of Corruption is reportedly going to be in charge of addressing whistleblowers’ reports. The Agency’s task is to create secure communication channels for anonymous whistleblowers, including online channels, telephone hotlines or electronic mailboxes.[4] The law gives the Agency the right to obtain information from open databases and foreign registers.
Once whistleblowers’ information has been received, the governmental authority checks the report and its facts to decide whether to initiate a separate proceeding, in particular, a criminal investigation or proceeding on an administrative offence.
The law establishes the lists of guaranties for whistleblowers, the main ones being:
• free legal aid, related to the protection of their rights as a whistleblower;
• physical protection of themselves, their family and property in case of threats to health or life;
• the right to reimburse the expenses in connection with the protection of the rights of a whistleblower;
• the right to receive psychological assistance to deal with stress from retaliation;
and
• the right for exemption from legal liability in cases specified by law.
In addition, whistleblowers have a right to receive a financial reward for information provided, which could be useful during the investigation of corruption cases, where damage to the state is upward of UAH10m (approx. US$400,000).

The whistleblower can receive up to ten per cent of the monetary value of the revealed corruption offence after the court has returned a prosecution.
Ukrainian Parliament restores the criminalisation of illicit enrichment Ukraine adopted a law criminalising illicit enrichment in 2015 but in February 2019, the Constitutional Court of Ukraine recognised the law as unconstitutional. That step raised serious concerns and apprehensions among anti-corruption campaigners, international organisations and Ukraine’s overseas backers.
Therefore, on 29 August 2019, the new President of Ukraine, Volodymyr Zelenskiy, submitted the urgent Draft Law No 1031 on civil forfeiture of high-ranking officials’ assets obtained through corruption and restoring criminal liability for illicit enrichment.
The law was supported by parliament and enacted on 28 November 2019. The Criminal Code of Ukraine was amended by article 368-5 (Illicit Enrichment).[5] This article stipulates that an official’s acquisition of assets worth more than UAH6,500 non-taxable minimum incomes of citizens in excess of their legal income will be punished by five to ten years’ imprisonment, along with deprivation of the right to occupy certain positions or engage in certain activities for up to three years.

As of 1 January 2020, the criminalised difference between obtained assets and legal income of an official amounted to UAH6,837,500 (approx. US$273,500). Assets include not only money, property, works or services, but also reduction of financial liability and cryptocurrency. The main goal of such changes is to reduce the potential number of cases of illicit enrichment and to focus on the most significant violations. State Bureau of Investigation relaunched The State Bureau of Investigations (DBR) was established in 2018 to deal with crimes committed by top officials, law enforcers, military officers and judges.
On 3 December 2019, the Ukrainian Parliament upheld the Presidential proposal to
reform the DBR. In particular, the Draft Law No 2116 ‘On Amendments to the Law of
Ukraine on the State Bureau of Investigations Regarding the Improvement of Activities of the State Bureau of Investigation’ was adopted. As a result of the new Law, the DBR chief and his deputies then in office were dismissed.
The main changes affected the powers of the DBR chief. Previously, the DBR head shared their authority with two deputies. The new law makes the chief the single- handed leader.